“Hazel, the miller’s daughter, is courted by a country boy and a sophisticated city boy. Her father favors the country boy, but she elopes with the city boy. Before they can marry, his wife shows up and stops the ceremony. Hazel tries to return to her father, but he has disowned her. She jumps into the river, but is rescued by the country boy, who later marries her.”
IMDb

“The rural America (…) contrasts sharply with the impersonal city of The Ex-Convict, The Kleptomaniac , and Life of an American Policeman. These urban dramas focus on the breakdown of community relations and their replacement by an unfeeling and often corrupt class structure. The Miller’s Daughter (September-October 1905) contrasts this sinful, decadent city to the simple, honest country in a fascinating reworking of Steele MacKaye‘s melodrama ‘Hazel Kirke’. MacKaye’s play was first performed at the Madison Square Theater on February 4, 1880, and ran for 486 performances. It pioneered theatrical realism by dispensing with mustachioed villains and subsequently became a standard number in the melodrama repertoire of traveling theatrical troupes.
(…)
This screen adaptation shares many parallels with Porter‘s adaptation of The Ex-Convict. The mechanism for family reconciliation — the child — is a Porteresque touch. Porter also reverts to melodramatic, good-versus-evil stereotypes, but increases the realism by making the characters ordinary people, filming on location and avoiding the pastoralism of MacKaye’s play. Many offstage occurrences are shown in the Porter film, including Hazel’s suicidal jump and her rescue. Class differences are banished from rural life (Rodney is just an average farmer) and located in the city. The portrayed conflict between small-town America and large-scale capitalism articulated the beliefs and fears of many native-born Americans. It reflected not only Porter’s early experiences but the major demographic shifts of the 1880s and 1890s that had pushed Americans, including Porter and Griffith, out of small towns and into the metropolitan centers.”
Charles Musser: Before the Nickelodeon. Edwin S. Porter and the Edison Manufacturing Company. Berkeley/Los Angeles/Oxford 1991, p.306-307 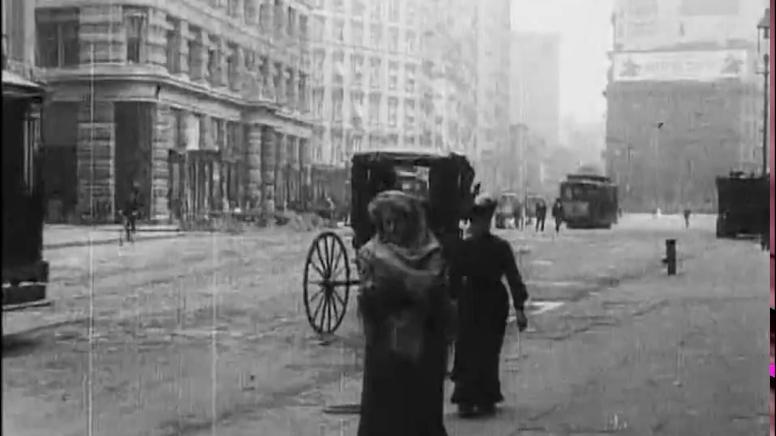 >>> The Ex-Convict and The Kleptomaniac on this site: Porter and Griffith: The Early Social Drama