“Lois Weber, who kept that simple name all of her life, was born in Allegheny, Pennsylvania to a very religious family. Many of her relatives were preachers, and at a young age, she played the piano at church and sang in the choir.
In 1897, she left home to take voice lessons in New York with the goal of becoming an opera singer. She toured with a singing group, where she met Wendell Phillips Smalley, the company stage manager. He was a descendant of Wendell Phillips, a human rights pioneer who had supported Lucy Stone and other suffragists, and it therefore is not surprising that Smalley encouraged Weber to keep her maiden name. His influence on her clearly was powerful, and she never returned to the religiosity of her roots.
They married in 1904 and soon were involved with the pioneer motion picture industry. She first worked for the Gaumont Company, where she was fortunate to be mentored by the world’s first female director, Frenchwoman Alice Guy Blaché. In 1911, the couple moved on to the Rex division of Universal Pictures. As part of Universal, Weber managed all the roles basic to production: she directed, wrote stories and subtitles, designed sets, gathered props, and edited film.
For a brief period in 1914-1915, Lois Weber and her husband left Universal to work for Bosworth Company. It was there that she made the first of the full-length, social-message films for which she became known. Weber’s realization that moral messages could be conveyed through film resulted in her most famous film,  Hypocrites (1914) which was especially controversial because she posed naked to represent ‘the naked truth’.”
National Women’s History Museum 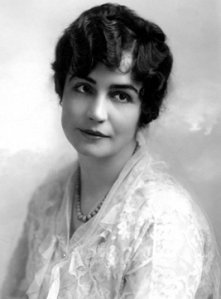 More about Lois Weber:
Anne Marie Sweeney in The Projector

Lois Weber on this site:
>>> Where Are My Children,  The Price,  How Men Propose,  Hypocrites