“La Hantise (1912) (“The Obsession”) is a half-hour film drama. It looks at the suffering caused by a palm-reader’s prediction to a woman that a loved one will die. The poor woman really endures agony over this. La Hantise is in some ways an early film example of a soap opera, the kind of tale featuring a ‘noble woman who suffers and suffers’. This kind of story can be very hard to take.

Attacking Pseudo-Science
More positively, La Hantise is also an early example of exposing pseudo-science junk like palmistry, and all the harm fake pseudo-science does in our society. Unfortunately, in the 2000’s the United States media is deeply awash in the supernatural, paranormal and esoteric: all worthless garbage that causes social harm. Feuillade’s approach is vastly better.
It is often thought that Feuillade was an influence on Fritz Lang, although there is apparently no documentary evidence backing this up. Lang, too, would include scathing exposes of false supernatural mediums in Ministry of Fear (1943) and The 1,000 Eyes of Dr. Mabuse (1960). Other people in the 1910’s were also exposing such frauds: Bayard Veiller‘s stage play ‘The Thirteenth Chair’ (1916) is an example.

Flashing Lights
Flashing lights are an image that runs through Feuillade. They are highly dramatic. And as a purely visual image, they are well suited to silent film. One of the best scenes in La Hantise shows the revolving lights on top of the Eiffel Tower at night.

Evening Clothes
Feuillade’s enthusiasm for evening clothes returns, with the man the heroine talks with at the party in a tuxedo, and another man in the background in full white tie and tails.
It is somewhat atypical in real life to have men in two different degrees of formal dress at one event. Etiquette would rather have all the men in tuxedos, or all the men in tails. This is perhaps an example of Feuillade’s image of ‘two men in similar clothes, but with different degrees of formality’. Judex and his brother will be the most striking example.

René Navarre
The nice guy husband is unexpectedly played by René Navarre, best known for clever villain Fantômas. Navarre can be memorably creepy, in other films. But here he is playing a type that will recur in much subsequent cinema: the blandly decent, ideal husband, a steady man who is everything a woman in a melodrama can ask for in a good guy spouse. He is a loving husband, a devoted father, cheerful and a great provider. Like almost all such movie Good Husbands, he is also strictly bland, so he will not upstage the heroine and her traumas.
Navarre does all this very well. No one seeing La Hantise would ever suspect him of being a master villain.”
Michael E. Grost 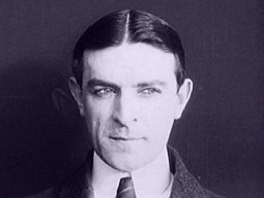 >>> Titanic – In Nacht und Eis on this site: Fiction and Newsreel